A Brush of Darkness by Allison Pang 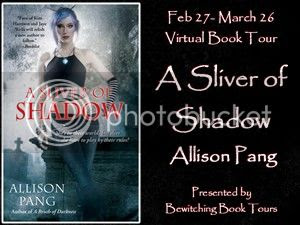 
The man of her dreams might be the cause of her nightmares.

Six months ago, Abby Sinclair was struggling to pick up the pieces of her shattered life. Now, she has an enchanted iPod, a miniature unicorn living in her underwear drawer, and a magical marketplace to manage. But despite her growing knowledge of the OtherWorld, Abby isn’t at all prepared for Brystion, the dark, mysterious, and sexy-as- sin incubus searching for his sister, convinced Abby has the key to the succubus’s whereabouts. Abby has enough problems without having this seductive shape-shifter literally invade her dreams to get information. But when her Faery boss and some of her friends vanish, as well, Abby and Brystion must form an uneasy alliance. As she is sucked deeper and deeper into this perilous world of faeries, angels, and daemons, Abby realizes her life is in as much danger as her heart—and there’s no one she can trust to save her.

A Brush of Darkness by Allison Pang
My rating: 5 of 5 stars


After a tragedy, Abby became a Touchstone (a human that holds a Fae, Daemon, or Celestial to the mortal plain) for the Protectorate.  Still dealing with all that has happened, she didn’t know what she was getting into when she signed the 7 year contract.  When the Protectorate disappears for several months, a good looking Incubus shows up searching for his sister, and Abby agrees to help him.  Worse yet, others start disappearing.
Will Abby be able to find the Protectorate and survive the challenge of finding the missing?

I really liked this book.  It was a wonderfully spun tale that included all the great elements of a fantasy.  Personally, I’ve always been a big fan of the Fae, so I really enjoyed how Ms. Pang wove her story.   I thought that her characters were great, though I had a hard time connecting with Abby in the first quarter of the book (I think not having experienced such a tragedy and then on top of that trying to understand Ms. Pang’s spin on the mythology of the Fae, it was a bit distracting to understand Abby).

And then there was Phineas, the mini unicorn.  Stereotypical unicorn he was not.  I laughed more when Phineas was talking or doing things than I did any where else in the book.  Needless to say, I don’t think I want a unicorn anymore.

Personally, I think the best part of this book was Brystion.  I can I just say it, Y-U-M-M-Y!  I mean who wouldn’t think of a tall, dark, and handsome Incubus as yummy (and no, I didn’t picture him as Johnny Depp either :P).  Brystion was such a great character as a whole, and not just for the stuff he could do, it was the person as he was.  He wanted to be selfless, loving, and honest, but the creation of an Incubus (plus what he has done and was doing) seemed to prevent that.  He constantly was hiding something, even mourning something.

There are great movie and book references throughout the book.  And I must applaud Ms. Pang for not over doing that, or for just adding it to be adding something.  Sometimes those references and quotes can be stilted, or worse, they overpower the story as a whole.  But each of the quotes or references she used through the book only helped it move along.  I know it made me want to re-read some of the classics mentioned.

There were a few things that were a bit distracting.  I got confused a few times where Brystion was mentioned as Brystion in one sentence and then Ion in the next sentence.  Trying to understand the Midnight Marketplace and then the magic-infused iPod were also a bit confusing.  But as I read through the book, I got more information that explained all of it.

As a whole, I loved this book, and I highly recommend it!